Jackson, Mich. – The building is still months away from opening as a school, but there are already students in the hallways of the Jackson County Intermediate School District’s new Central Campus.

Jackson Area Career Center Construction Trades students Joey Schonhard and Matt Painter have been working at the former Frost Elementary school since December while on co-op with R.W. Mercer. Mercer is the construction manager for the JCISD Central Campus project. Co-op is a work-based learning experience for Career Center students. It gets them out into the workplace where they can learn about a company, get real work experience and get paid. Students are typically on co-op four days a week, and then come to their Career Center program on Fridays. For Joey and Matt, you just can’t beat this kind of “classroom”.

“I cannot sit at a school desk all day, I like this physical work,” said Joey. “I look forward to getting up and going to work. It makes school a lot more enjoyable when you have something like this to look forward to - and I’m getting paid,” said Joey. Both teens also recognize the benefits of working with experienced adults. “There’s so much going on, so many people to learn from, how to talk to people. That’s the biggest thing - just learning how to work with people that aren’t your age - and how to hold a conversation with someone,” said Matt.

The two Lumen Christi seniors were tasked with a lot of demolition work in the beginning, like ripping out lockers, ceilings, and drywall. Mercer Site Supervisor Dusty Richards says Joey and Matt have a great work ethic. “They’re good kids doing good work. We’re happy to have them and they blend in well with the rest of the crew.”

The two teens spent about two weeks removing hundreds of lockers from the hallways, and then moved into classrooms where they took whiteboards down, pried things off walls, tore down the ceilings and old lights, even dismantled giant cabinets - and then hauled all of that out to dumpsters, sometimes having to use sledgehammers to destroy stuff to make more room in the dumpsters. The demo work took a lot of time and muscle, and even uncovered a few surprises. “When we were pulling off the lockers from the walls, we found all kinds of things; a really old candy box from the 1960s, old pictures, a lot of marbles, old matchbox cars, kids’ drawings, some CD’s - even a Dumb & Dumber movie,” said Joey and Matt.

Both Matt and Joey will continue to work for Mercer through the summer. They were both offered full-time employment and intend to stay on and explore different assignments throughout the company, including concrete work, office work, even the petroleum construction side of Mercer. Both students were recognized for this next step in their career path during the recent Signing Day ceremony at the Career Center. Matt and Joey say they are looking forward to being a part of the Mercer team, which happens to include a lot of former Career Center students. “A lot of them were surprised to learn we’re just high school kids,” said Joey. “People are always saying to us ‘Oh, I was at the Career Center 10, 15, or 30 years ago.”

Matt says he’s grateful for this work-based learning experience, and encourages other students who have an opportunity to go on co-op to take advantage of it. “First of all, you get paid, which is huge for a high school student. You really learn a lot by being on a job site every day, and it gave us a chance to get our foot in the door at Mercer,” said Matt. It’s not just work skills these teens are picking up either. “Instead of working with a bunch of 17-and-18-year-olds who really don’t know what they’re doing, we’re working with 25-30-40-and-50-year-olds who have all this great life experience and treat us like adults,” said Joey. “It’s something you just can’t get in a classroom or read about in a book, we’re experiencing it firsthand.”

Both teens are excited about the project as a whole and take pride in the fact that they are playing a role in transforming the former elementary school into one that will centralize special education programming for 0-to-26-year-old students across Jackson County. “I think this school will look great when it’s done,” said Joey. “I’m going to be able to say ‘I helped do that’ - and that’s awesome.” 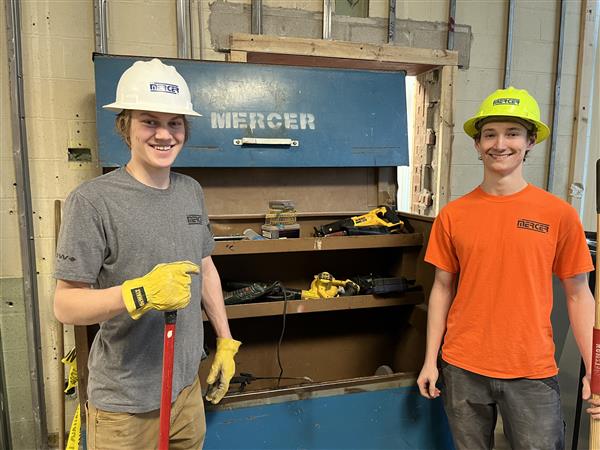 Dusty Richards, site supervisor for Mercer, with Joey and Matt 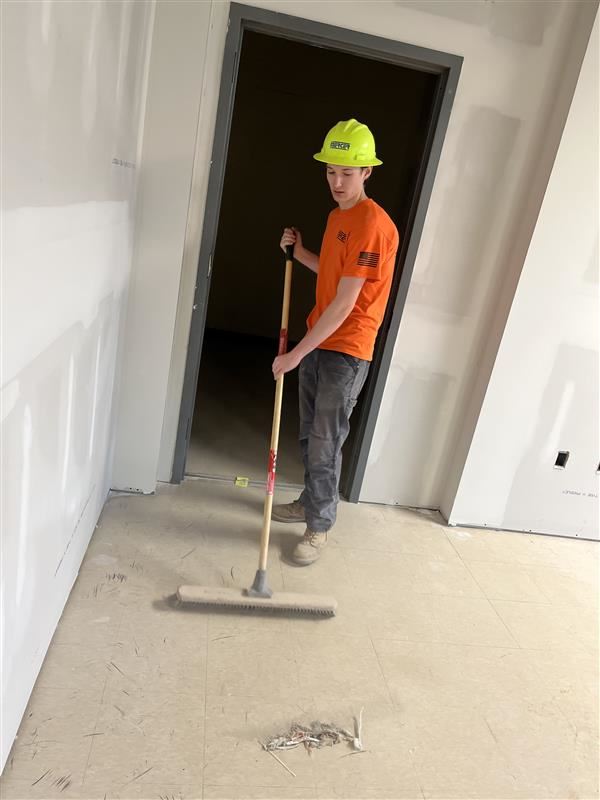 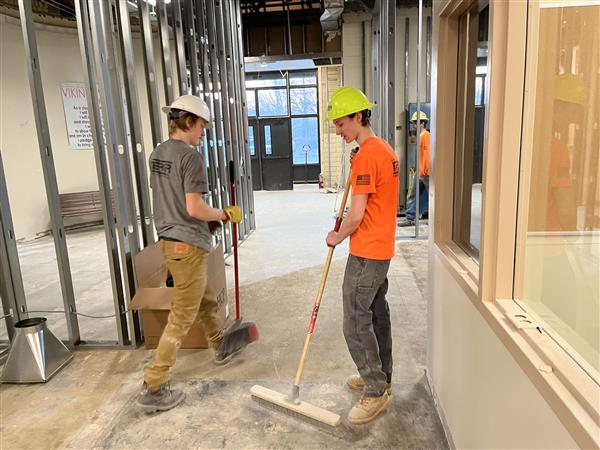 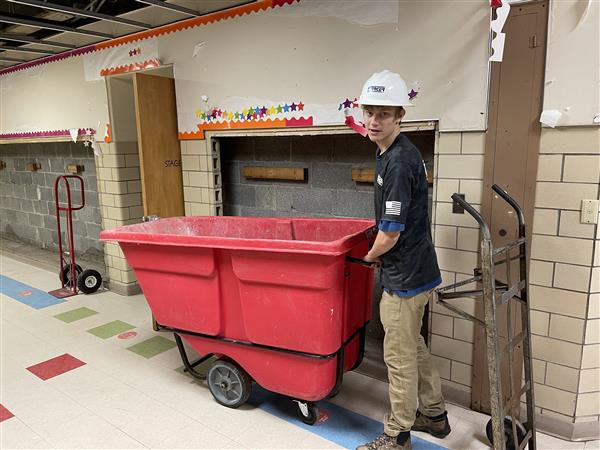 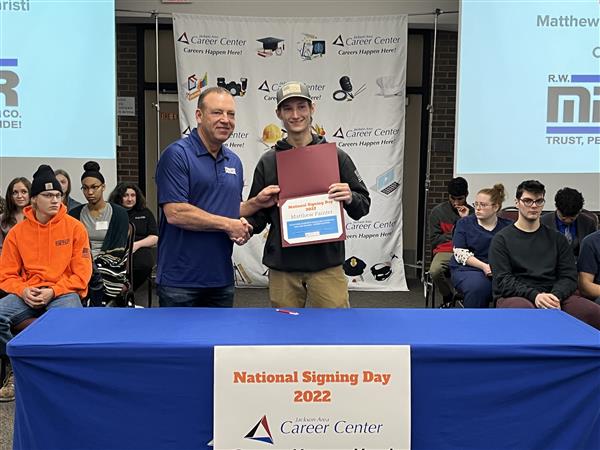 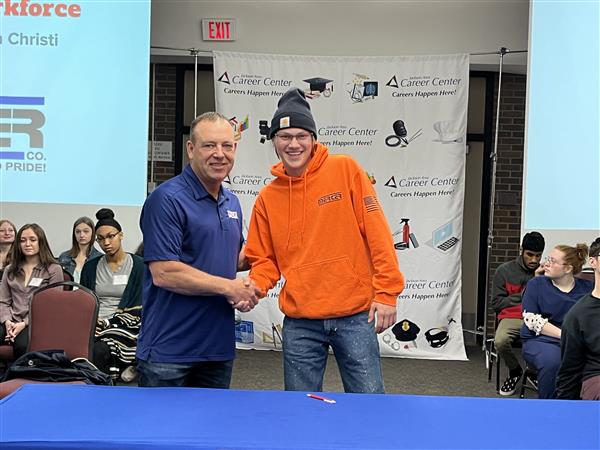 It is the policy of the Board of Education not to discriminate on the basis of Protected Classes in its educational programs and activities and employment. Protected Classes generally include race, color, national origin, sex (including sexual orientation or gender identity), disability, age, religion, height, weight, marital status, military status, ancestry, genetic information and such others as are defined in federal or state law. More detailed information can be found in the Board of Education Policies on this website. Inquiries and complaints regarding discrimination in programming and employment may be referred to any of the following: Catherine Brechtelsbauer, Director of Human Resources and Legal Services, 517.768.5155; Dan Draper, Principal, Jackson Area Career Center, 517.768.5222; Amy Rogers, Principal, Lyle Torrant and Kit Young Centers, 517.787.8910.
Copyright © 2002-2023 Blackboard, Inc. All rights reserved.